Just a few more days and Cins and I should FINALLY be able to get episode five out! I hope everyone is still sticking with us, and would like to mention that this hiatus is ENTIRELY my fault.

This is the time of year where I start to get dreamy, and find myself thoughts drifting of their own accord to my favorite time of year which is, of course, Halloween. According to one of my favorite websites, Halloween is Here, spooky times are only 123 days away as of this posting. Hell, by the end of next month we'll be seeing Trick or Treat candy in stores! And personally, I LOVE it.

So this seemed like the ideal time to share the accidental Halloween craft I ended up doing for a loved one. One of my nephews is still very small, and he has developed a deep and profound love affair with his two Care Bears, Harmony Bear and Funshine Bear. While at my house he was rooting through my eBay stuff, and stumbled across some Care Bear accoutrements I had forgotten I possessed. He found a dress for the same-sized CBs he has, as well as a sleeping bag and a pillow, also the perfect size. He immediately claimed them as his own, and I gave them to him, wondering how hard his dad was going to let me have it when he discovered I'd given his son a dress to play with. (As it turns out, my brother took it all in stride, and just rolls his eyes when he sees it.)

After discovering that these items were several years old and therefore unlikely to be found at our local Fred Meyer's (Kroger's to all on the East coast), I was press-ganged into making him a duplicate of each item. How this became a Halloween craft lays in my cloth inventory: almost all of my fabric stash is Halloween themed because a: I'm planning on making myself an All Hallow's quilt, and b: I just really fucking like Halloween.

The Tiny Terror picked the fabric he liked which I immediately nay-sayed; he picked purple fabric for a purple bear. He got black instead. I will sew for him, I will not offend my own aesthetics for him! Plus he was fine with the black. 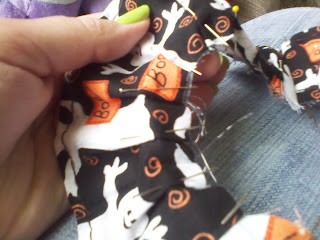 Here are the pleats pinned into place. I stabbed the shit out of myself several times doing this, and two of my nephews kept taking off with my pin cushion; apparently that was the coolest fake tomato-and-strawberry combo that ever was.

Anyone who has ever had to hand stitch pleats will understand my frustration. Normally with a machine you pin your pleats and then zip a line as fast as fucking possible, but my machine has apparently been watching The Exorcist a lot and getting ideas; at the moment it just turns into a hell-mouth and bites at me whenever I try to use it. 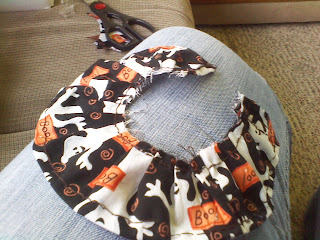 Here the pleats and hem have been poorly sewn. He's six, he doesn't give a crap.

I was SO glad to be finished with those pleats. Small hands kept trying to "help" and subsequently the pins would slip. I may have flipped off the skirt after I had it all sewn. Hard. Like, the ligaments in my finger hurt afterward. 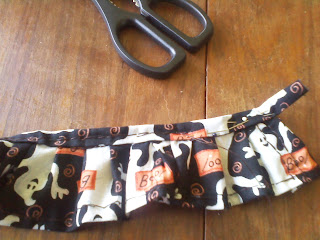 Waistband attached. Not sure why a bear with no waist needs one, but hey, I'm just the seamstress.
This part was fairly easy once I got everything folded and pinned. I am fortunate in that I have nimble fingers, and also that I have about a bajillion pins and would gleefully pin shit into submission, then taunt it. 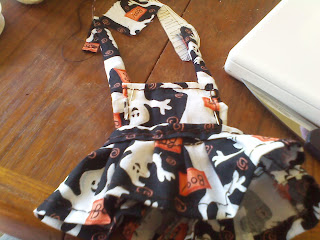 This looks so flirty, especially for a Care Bear.

Here the straps that will become the sleeves are attached the the apron front. The other dress has little ruffled cap sleeves attached to the straps, but I was suddenly struck with the notion that I would have to hem on a curve and then pleat AGAIN, then attach, and I decided it was now more of a sundress. Harmony Bear needed some vitamin D. "D" for "Don't do that to yourself". 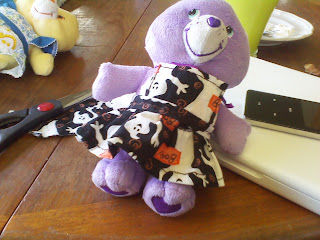 And there's the finished product. I have to admit that it was gratifying to succeed in this; I have never taken a proper sewing class, and did this dress by eyeballing it, as patterns both frustrate and intimidate me (I don't know how to do darts). Fortunately, I'm very good at taking things apart in my head, so I just reduced the simple design of the dress down to shapes and ended up with my own variation. To date I still need to attach a pocket, but over all, I consider it done. The Tiny Terror loves the dress, and really, that's all that matters, right? Plus, I have to be honest: little boys playing with Care Bears is adorable, and there's not a damn thing wrong with it.

So there's my post on how I made a creepy dress for a Care Bear! Aren't you glad you read that? Do you feel like a better, stronger person? Do you feel that YOU TOO could make dresses for small relations, regardless of gender? Then POST PICTURES, fool!
Posted by Stac at 10:33 AM 8 comments: Links to this post

Labels: aren't you glad you tuned in for this, care bear, creepy crafting, stac

Not literally. I think eBay frowns on people trying to move bio-hazardous materials through their auction site.

I'm selling some stuff to help address my real-life problems as described by my delightful partner in crime, one post below. If you guys would be nice enough to take a look and see if there's anything you like there (or pass on the link if you know someone else who might like this) I would really, REALLY appreciate it. There's a melange of stuff though I only have 8 items up at the mo, but more, and a lot of it Halloween related, will go up tomorrow.

Thanks guys, and thanks for bearing with me!
Posted by Stac at 4:14 PM No comments: Links to this post

Hey all!
So Stac, has run into a few real life shenanigans which means that Episode 5 is going to be delayed until after forth of July. I hope you all stay tuned until then!

To hold you over, I give you the guest hosting stint that Stac and I did on our "sister" podcast, Sassycast. Hopefully this will tide you over until we're back on track.
Hopefully this will also be available on our iTunes for downloading soon!
A big thanks to Roy and Chris for hosting us crazy bitches.

Thanks again for sticking with us for this long!

Labels: I sorta feel like I had a stroke, Sassycast

Its almost 3 am and here I sit, writing a paper that's due in 8 hours. I have to be up for class in 5. My paper is on Mayan origin stories, taken from the Popol Vuh, which is the text that explains the creation of the world in Mayan belief systems. It was miraculously saved from destruction when European contact was made with the New World; the Mayans hid it.

As I write this paper, I am listening to the theme to Clive Barker's Nightbreed, one of my favorite movies, and one of my favorite pieces of thematic music. Clive Barker's work is always bloody, but it's more than that, too, it's lymphy, I once heard it described, and that description has always stuck with me as the perfect summation of the look of a lot of his gore.

So while listening to lymph music, what do I read, in a section on human sacrifice but this:
"You will become great in your very being. Defeat all the tribes. They must bring blood and lymph before us, they must come to embrace us. They belong to us already." (Popol Vuh, 163-4, Tedlock translation).

That's a lot of lymph for 3 in the morning.
Posted by Stac at 2:42 AM 2 comments: Links to this post

Labels: Clive Barker, finals week, i hate school, I really fucking need to go to bed, I sorta feel like I had a stroke, stac

Yup! We picked the films for our first Listeners' Choice Ep! We'll be covering these two movies:

Flight of the Living Dead. Recommended by Matthew.


And to continue on our dead theme we'll also be covering Fulci's City of the Living Dead. Recommended by our own Metal Mikey.


Thank you all for you suggestions! We ended up with a hella'va list! If we didn't pick your movie, don't be discouraged, we plan to do more Listeners' Choice episodes in the future, so please keep recommending them to us!
Posted by Cins at 6:25 PM 4 comments: Links to this post