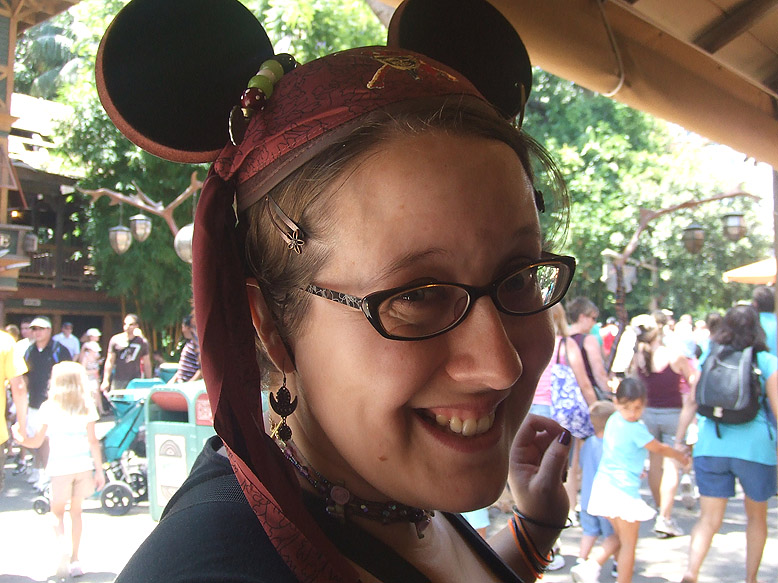 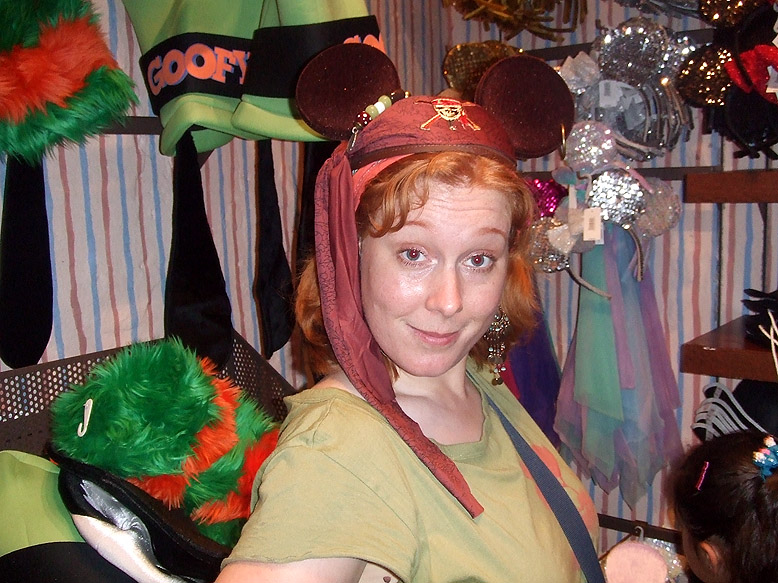 Together, their vaginas are haunted.
But other than that. I'm sure you're wondering "Hmm..the girls have been pretty quiet lately.". OR you've been wondering "JEEZUS! Don't they ever update regularly?! EVER?!"
Well either way, we have quite the legitimate reason to have gone so quiet over this month. Reasons that don't involve finals, mortgage, work, or taking the time out to beat someone senseless on Pirates of the Caribbean.

And this plan has been in the works since last year's Convergence.
Stac and I are pretty avid Podcast listeners. Stac has heard just about all of them. I'm just getting started, being addicted to Cadaver Lab, Night of the Living Podcast, and now dabbling in The Dark Hours Podcast, and Drunken Zombie. After some lengthy discussion and copious amounts of wine, Stac and I decided to join in on the fun. Welcome to the wonderful world of Podcasting, Creepy Kitch.
We still plan to blog here like usual, but now, we will also be releasing a Podcast every two weeks. Our first recording session will be this Thursday night and BOY do we have a doozy lined up! Hopefully you'll stay tuned to listen to our Sexy sexy voices...and by sexy I mean liquor drenched and surly.
We'll be making an announcement on the blog about our first broadcast this week so Stay Tuned!

EDIT: Note to self....do not moderate comments when not awake. Sorry folks. I hit the wrong button and rejected comments for this post...because I'm talented like that. Feel free to post them again!
Posted by Cins at 9:25 AM 2 comments:

Labels: Podcast, stac and cins will punish those who cross them

Monsters Vs Madmen. Round 8!

Once again...I am stunned. 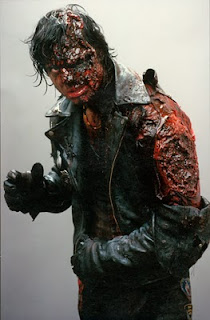 I am at a loss for words...I'm also surprised by the amount of Marlow fans who read this blog. But bravo Senor Pointy Mouth! You have lived to fight another round!

Now you are going up against the strong but silent supernatural type.

Monsters Vs Madmen Round 8 we have: 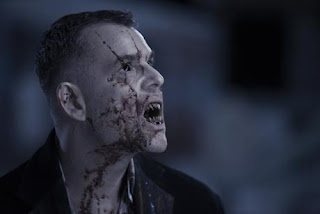 Marlow from 30 Days of Night
VS 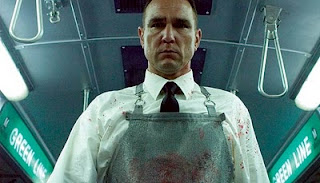 Lets see them both in un-embeddable action.

Mahogany has a typical evening at work

Vote Now! We'll announce the winner next week and the winner will go off to the winner's circle to await the Battle Royal!

I collect "creepy"; things I find that fit that bill are displayed, consumed, or in the case of the internet, added to the bookmarks file. I'm also a goon over on the Something Awful forums (try to contain your shock), and there is frequent fodder for the Creepy Collective that passes through the forums over there. One such item is the link to a website: The Artwork of Keith Thompson.

This guy is amazingly talented, and comes up with often frightening little snippets of story to go along with the artistic children he gives birth to. Some of his stuff is commission work for productions like Borderlands, gaming books/sites, etc, but for my nonexistent money, the best is his original stuff. He does everything from landscapes to characters to robots and the undead, and it's always unsettling. Go into his gallery, and have a look around, you won't regret it. But a word of warning: be prepared to lose a good hour or so of time exploring. For me his artwork causes lost time. Either that or it's whatever's been rustling in my closet, eating my shoelaces.


Here's one of my favorites; I plan to get a print of this when my finances permit: 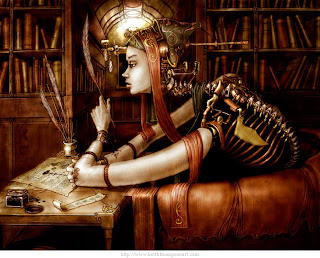 "SCRIBE: A scrivener automaton working in a rather wealthy merchant's library. The arcane procedures for creating automatons are as varied as their appearance and roles in society (servitors, military, labour, prostitution, etc). The taxidermic use of cured human remains is legalized, economical and common place in their construction (similar to how the powdered wigs in our past often used the hair of corpses). However the practice of "rendering" down living persons into an automaton state is outlawed, it is frequently employed since the resultant product tends to outperform the legal alternative. The merchant who owns this particular scribe automaton has some very extensive paperwork detailing her conformity to all applicable regulation. Despite this assurance, those who deal with her have noticed how quickly she learns new tasks, and have caught her smiling when backs are turned."
Posted by Stac at 4:40 PM 4 comments:

Horror Shout Outs at the Oscars!

This isn't only a great day for women in Hollywood, its a FABULOUS day for horror fans! 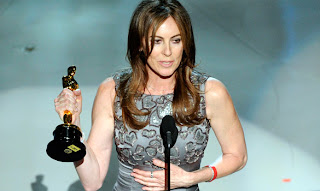 The gal of the hour (and the one I was rooting for), Kathryn Bigelow won the Oscar for best director! She is not only the first woman in history to win best director, she is also the director of one of THE BEST vampire films ever made, Near Dark! Granted, she didn't win for Near Dark... since that was made over 20 years ago...but still, props to a fellow uterus for winning!

Also, Roger Corman won a lifetime achievement award which makes be endlessly happy. Call him a hack all you like but you can't deny those Vincent Price Edgar Allen Poe films he did are total unabashed AWESOMENESS. I love ya, Roger, you old coot! 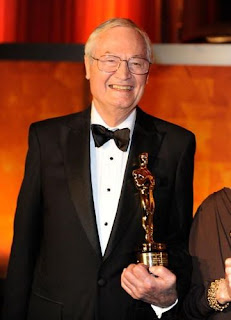 Also, Hollywood gave us horror fans a shout out with a little tribute to horror. A little cheesy tribute to horror yes but HEY, any bone ya throw to me as a fan is usually appreciated! Though I still stand by my convictions that it should have been introduced by Kathy Bates instead of the Twilight folk. Not because I hate Twilight (I'm pretty indifferent about it) but because I really don't consider Twilight in the horror genre. I also don't consider Edward Scissorhands to be a horror film either but they stuck that one in there too. *shrugs*
Oh Hollywood. You crazy.
See the tribute here. This also includes the great Paranormal Activity parody they did on the show: 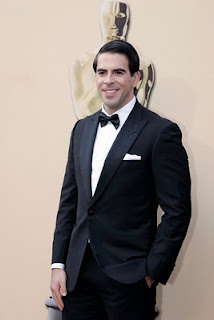 He was there with his bro-mantic partner, Quentin Tarantino. I think they make a cute couple and just want to fold Eli up and put him in my pocket...even if he is over six feet tall. I may not think his movies are the end all be all and yes, he can be kinda a douche at times...an adorable adorable douche. But he'll always be a little pocket gore hound to me.
...Don't you ask me to explain my attractions! Stacy already admitted to wanting to have sex with Jason so at LEAST give me this!
Don't judge meeeeee!!!
Posted by Cins at 11:34 AM 7 comments: 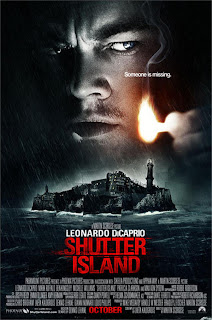 Look at me! Being all relevant and stuff!

I've been chomping at the bit to catch this movie for a really long time now. I'm a bit of a Scorsese fan girl (Though honestly, nothing can beat the masterpiece that is Goodfellas in my opinion). I saw the trailer ages ago in the theater and thought that it looked fantastic. Then I promptly forgot about the film and moved on to other things coming out. I was reminded of it by a couple TV bumpers and seeing it listed on IMDB as an upcoming release. So overall my exposure to the film was kinda nil other than that first trailer I saw oh so long ago. The only thing I really knew about the movie was it was a period piece, it involved an insane asylum, and there was some really creepy imagery in it. Overall I was a complete clean slate. And frankly, that's how I recommend you see this film. The less you know about it, the more intriguing it is.
I don't consider it the best thriller I've ever seen and I don't think its a masterpiece on par with the Departed, Taxi Driver, or Goodfellas. But its extremely intense, beautifully shot, and it had my interest from beginning to end. Definitely in my top five Scorsese films. So in my opinion, it was worth the price of admission and the drive out to the theater.

Even though I don't want to give much of the story away, here's a bit of the basic plot. Teddy Daniels (played by a jittery Leo DiCaprio) is a Federal Marshal who is sent to the infamous Shutter Island asylum to investigate the disappearance of a female patient. And from there its total mind fuck chaos. That's really all you need to know.

Unfortunately I plan to gloss over a lot of this movie because I rather not give anything away. But you can expect a film more along the lines of Silence of the Lambs and Session 9. Actually it has a LOT more in common with Session 9. The group I saw it with figured out the film in a heart beat. I myself really enjoyed the whole unfolding of the story and was always trying to guess what was going on. Now I don't know what that says about me. Maybe I'm an idiot while my friends are super movie savants. But damn it, it had me guessing every frame and never ceased to surprise me.
Visually I loved this movie with a passion. Its as if a Hitchcock film and a Kubrick film had a moody little baby. It uses many of the classic noir looks, lighingt, and at many times monochromatic coloring. Yet the film is sprinkled with crazy cuts to creepy unsettling imagery that hearkens back to The Shining. The music is wonderfully erratic and at first seems almost out of place. As the film goes on you notice how the music is used to create tension and disorientation. Even the acting style is stylized, feeling like the old 1950's noir films which later on falls into more naturalized acting..with reason I assure you. Everything in this film is deliberate and demands that the film be watched again.

There's really not much else I can say about this film without giving it away. And like I said earlier, the best part of the movie is going in completely blank.

If you're looking more for a Scorsese horror film, check out his remake of Cape Fear instead. If you like movies like Session 9, Memento, Silence of the Lambs, or any type of thriller that screws with your mind you'll like Shutter Island. Its not a fast paced gore fest of scare but a intense, well acted, and beautifully shot film. Check it out!