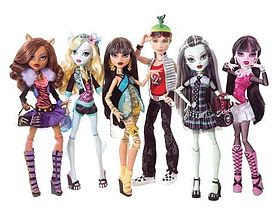 I still need Clio and Deuce. :(

Mattel hit a stroke of awesome recently, and my wallet is going to pay, with pain, if need be. This article is hard to write because I have a cat butt in my face. Apparently my neck/chest is the best and warmest seat in the house, according to Salem. This new doll line is called Monster High, and the dolls are the teenaged daughters (and a few sons. Prom IS coming, after all.) of famous monsters. They are also fucking adorable.

The main four and easiest to find are Draculaura, Clawdeen, Frankie Stein, and Lagoona Blue; I'm sure you can parse what child belongs with whom. I lucked out over Halloween and was able to get all four at my local Fred Meyer's who did a buy one get one free sale-- apparently Freddy's wasn't feeling too confident over their saleability. But when I went back later in the season the dolls were all gone, and there were none in the after Halloween corpse, though there were plenty of Halloween Barbies marked down.

These dolls are seriously cute, and one thing I really like is that they have their own mold-- they're not retrofitted Barbies or Bratz dolls. They're very jointed, especially on their arms, and each has her own little special touch. Frankie's eyes are different colors and she has stitching all over her limbs, Clawdeen has pierced wolf ears (and no human ears, a nice touch), Draculaura has elf ears as well as fangs (along with Clawdeen), and Lagoona has little, transparent, removable fins on her arms and legs.

Another touch I liked is that each of their fashion styles has its own flavor. All of them are very "fashion doll chic", of course, but in that continuum there are little touches of individuality. Lagoona's look is surfer casual (with heels, but somethings are endemic to fashion dolls), Draculaura is sort of new wave happy goth. Clawdeen is very animal print fashionista, and Frankie has a Hot Topic punk touch with lots of plaid. Each character also has her own back story, and comes with her little diary.

What we have here is a very charming doll line, and perfect for creepy little (or big) girls to play with. Eventually I'm going to get a shelf to display them in my living room, and I may get a doll for either my goddaughter or one of my nieces for Christmas, depending. Next year an extended line is slated, featuring Ghoulia, the zombie girl, and more boys, thankfully. I always hated having ten Barbies to one Ken; it always made sex in the Barbie Dream bed awkward with everyone watching... ah, childhood memories.

Bottom line: this dolls are adorable, and we really need to encourage this trend in dolls! I NEED MORE CREEPY! And if you don't support them you'll awake one night to the the enraged gaze of Creepy Murder Dolls.

Thank about THAT before you snub Mattel!
Posted by Stac at 12:41 PM

My girls fell in love with these dolls at first sight! The packaging really is great too!

I know, aren't they adorable? I want to throw the boxes away but they're so cute I can't do it yet!