Holy Shit! I almost forgot about this!
Well I forgot then was wracking my brain for a new opponent then I saw cheesecake and well yeah...forgot.
Anyways, On with the fighting! 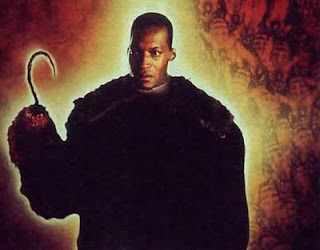 Candyman, we hardly knew ye. But you DID last two rounds AND you were neck and neck with Severen there for a while! My hooked avenger, you almost made it.

So Severen made it to the next round...and I have to admit I was rooting for him simply because Bill Paxton has never been sexier, damnit!

BUT will Severen live against a new foe? One of his OWN kind!?

Round 7 Monsters vs. Madmen we have: 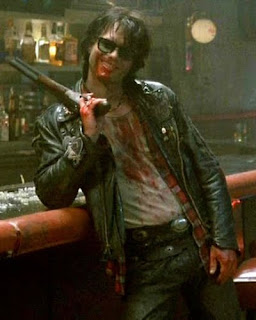 The frighteningly hawt Severen from Near Dark 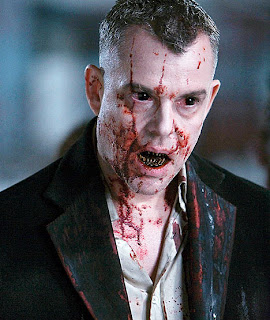 The I'm frightened I FIND him hawt, Marlow from 30 Days of Night.

Yup. We got the devil may care violence of Severen up against the cold calculated leadership of Marlow. Okay, for ME this a close one.

Lets see them in action. Unfortunately the videos are not embeddable so click below!
Marlow uses a gal as human bait and gives his pals a snack

And Severen...is still a dick.

Shout out your votes in the comments area and we'll tally them up and announce the winner next week.

Labels: 30 Days of Night, Cins, Monsters vs Madmen, Near Dark

You'd forgotten!? I knew it! Here I am, sitting patiently, waiting. And you're all eating cheesecake! Hrmpf!

Well you remembered so I guess I can forgive you.

I gotta admit. You didn't give me a lot to go on this time. Actually a video where Sereven seems to actually die. And a video where Marlow barely does anything but scare the living crap out of a girl. But in this case I've seen the movie Marlow is in, and I can remember Sereven's other audition tape. So here we go.

Marlow. My man. You gots the creep down. Severen creepy goofy smile has got nothing on your normal face, much less when you're actually trying. Severen has to smile otherwise he just looks kinda goofy, rather than goofy creepy.

So once again we got two leaders here. We have Sereven's band of misfits which includes all types. Women, kids, creepy old men. But they're all batshit crazy. I'm also betting they're pretty independent too. I mean look at Caleb. Guy ends up running Sereven over with a Mac truck.

Where as we have Marlow's posse who is pretty gender equal but goes for the size quality over age equality. TO each their own. But unlike Sereven's crew, they more raging animal crazy than batshit crazy. But also unlike Sereven's crew, Marlow seems to have a nice tight leash on 'em. I think thats a serious advantage. Even if one of Sereven's crew is fucking Vasquez in a fro.

Blood on the chin. Sereven's got it. Marlow's got it. Dude it is the /in/ fucking thing this winter. No vampire should be out

Lets see. What else.... Sereven really seems to like to play with his food. His entire crew does. But again the one on one thing. Sereven and his crew also seem to rely on shell shock to keep they prey from running away. Marlow and his crew though, they're pack hunters. They hunt. No one is getting away from them.

So Sereven can destroy a Mac Truck single handedly. While its moving. He can make it fucking explode just by tearing out its engine. With his bare hands. Marlow? Yeah he's fast but is he strong enough to take on Optimus Prime? No I think not.

Could Take on Optimus Prime: Sereven

Whose more of a dick?
Sereven - Pisses you off and THEN kills you.
Marlow - Breaks your faith in god and THEN feeds you to his friends.
Verdict: Tie.

Who can ambush better?
Marlow - Plans every detail, knows what to do, how to do it, and will get it done. You'll never seem 'em coming cause he knew you wouldn't. Surprise!
Sereven - Is your buddy right up until he isn't. And then he is your buddy again. Who the hell can predict that?
Verdict: Tie.

Sereven. My man. You can blow up trucks. Use trick boot knives like a Ballerina and you're definitely super strong. But in the end you got not no real style other than to burn 'em and leave 'em.

Marlow. You've got the beast within thing down. Who cares about cleaning up your prey. Its dead and you've won. You've taken their life, they're beliefs, their blood, and likely their soul. All without silly little human tools.

I gotta give it to Marlow. Sorry Hudson. Game over, man.

I admit I may have picked Marlow over Severen just to say that last line... maybe. ;)

Okay, I know, I'ma get eviscerated for that one. ;)

Severin. I've not seen either movie. I'm voting purely out of spite.

Or barring that, Optimus Prime.

Optimus Prime is off the ballot simply because he does not drink blood.

...well he does not drink HUMAN blood.

THAT'S what's behind that mouth piece!

Nah. He totally invites people into his cab and then, boom, transforms and squishes them into his tummy!

What a dope, totally forgot to vote, despite watching both clips and then feeling compelled to watch both movies once again, in their entirety. Of course the outcome was what I expected going in - Severen!

Maybe (as in 100% definitely) it's because Near Dark has had many years to wedge itself very firmly into my heart, but mainly it just comes down to the fact that Severen is just such a wild card, he's like the Begbie of Vampires and you just never can tell where you are with him. Marlow has that badass growlin' and glowerin' down but there's no surprises in store with him (unless you're Ben Foster of course).

I'm voting for Marlow, and I must admit that it's mostly because of my impish joy at seeing my mother squirm in the gore of "30 Days of Night."

When you're sixteen, seeing your mom hide behind her fingers and saying "Can I look now??" is a rare and succulent dish. It's almost like payback for all those stupid sailor outfits and beauty pageants. *shudder*