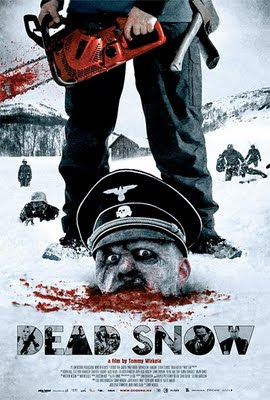 So, I DID finally get to this damn movie last night.

And I squeezed it in right before Heroes.
DVR, you're awesome.

Dead Snow was recommended to me by Mike at The Cadaver Lab Podcast. I'm a huge zombie fan and I've only heard about this from a few blogger friends. All I knew was that it had zombie Nazis in it.
And honestly that's really all I need.
I'm a simple woman, with simple needs.

So in a nutshell: Dead Snow is about a group of med student friends who decide to vacation for the winter up in a secluded cabin in the mountains. Unfortunately, the entire area is full of Nazi zombies. Why Nazis? Well apparently during WWII Nazi soldiers occupied a small town until the town's folk drove them out by force up to that mountain side. I'm not sure WHAT turned them into zombies but I'm sure it wasn't pretty. Decapitations, gore, and a sex scene in an outhouse (AAAAAAHH!!) ensue.

I'll give you fair warning, Dead Snow starts out REALLY slow. There is a lot of set up getting into the film. We have our heroes settling in, playing winter sports and Twister, chatting each other up, having sex in an outhouse (UGGH! WHY?!), and finding out about the area's horrible past before we really get to the action. I tend to not mind long set ups for movies and I do like it when a film tries to create characters that are more than just gore fodder. But I do think some of the set up could have been cut. It started to drag a bit. But luckily, just when I was considering turning it off for a while to watch Heroes, Dead Snow starts moving like a freakin' freight train and I was glued to my TV. So stick with this movie, the payoff is great!

The zombies in Dead Snow were definitely not your typical zombies, fast or slow. Our zombie Nazi team lead by a creepy and non verbal Col. Herzog were agile, emotional, and very VERY intelligent. Zombies with motor skills are a terrifying thing indeed! Also, you could take one down with more than just a head shot which did give our human characters more of an even playing field. I'm not sure if you could call them zombies or just cursed because of these traits. But they did eat human flesh/brains. Its a discussion I will have to save for my other zombie enthusiast friends for another day.

The zombie fights were stellar! We had hammers, chainsaws, machine guns, and many other epic moments. They also did a few homage shots to Evil Dead while preparing for battle. While the movie was not what I would call a zom com, it did have some really hilarious moments and some amazing "AAAH! Right in the KISSER!" battles. And a bad ass sews up his own neck with a fishing hook and some duct tape. If that isn't balls, I'm not sure what is.

For zombie fans, this movie is worth the watch, even with the slow set up. It doesn't bring anything new to the genre but it is a lot of fun. Just hang in there through the game of Twister and the outhouse sex (WHO WOULD THINK THAT WAS A GOOD IDEA?!?!) and I assure you the payoff is nice.

Okay, I am caught up! And not a moment too soon! I'll be off to Las Vegas this week. AWWW Yeah. So play nice with Stac!...or actually..Stac, play nice with everyone!
Posted by Cins at 9:00 AM

Outhouse sex. Most smelly sex you could ever have. At least modern portable toilets have chemicals in them.

This movie sounds awesome. I'm totally going to watch it.

Yeah...that whole thing? It grossed me out more than any of the gore in the movie. I mean come ON! The Smell alone would shrivel your peen!

Its a lot of fun. Check it out!

So my question is this: would the stank of an outhouse turn then turn you on, or would sex make you smell outhouse stank from then on? I smell (HAR!) a psych paper in this.

And in terms of playing nice I promise... nothing.

A Cinematic Slice of Cheese said...

Totally unrelated, but get your ass to the theater and see Paranormal Activity NOW!!!!!!!

Hmm. Okay now I am suspicious. I know I signed up for having Paranormal Activity appear in my theaters last week. But now it /is/ in my theater this week. I suspect they can't have set up the distribution of prints across the US like that so quickly just based upon 1,000,000 people requesting it.

Not that I'm not going to go but something tells me the 'sign up to get it in your area' was really just a massive publicity scam than a 'We're not going to show it unless you say we should'.

CheesyRoy>>*L* i will as soon as I can find someone to go see it with me! Max doesn't like ghost movies. I may be going with hi Best Man. *LOL*

Nojh>>...Its a conspiracy! Seriously though I wouldn't be too surprised if it was a publicity stunt.

Stac>>wow...You better write that paper. I bet you could get it published.;)